Making cuts to the portfolio? How to manage the tendency for project teams to fib

I SUSPECT THAT WE’VE ALL BEEN THERE, AT ONE LEVEL OR ANOTHER.

A good idea has been raised, for an area in which George/Georgia, the PM, has lots of interest, and wants to develop his/her skills and awareness.

After some jockeying for position, it’s agreed that Georgia/George will lead the project and, heavens above, it’s been tentatively approved for next year. It’s in the portfolio for development and we’re all quite excited to be working on it. The customer is keen, the sponsor is engaged, and the budget is there – and, then, just as we’re about to start the year, it’s not.

The overall budget has been reduced, each portfolio must take a hit and some projects will have to be axed. So, which ones are going to get the chop…?

In a perfect world, this would be an easy question. The lowest priority projects, of course. Ah, yes, but the portfolio was squeezed in the first place, to ensure that the projects that we really wantedwere included. Although the logical thing is to take the lowest priority work, actually the sponsors and stakeholders want everything – plus a couple more that we need to complete. Someone, somewhere will have to make the decision – let the games commence!

“The benefits could be improved, a bit. I’m sure we could deliver it a little earlier, maybe remove a sprint…? Perhaps manage with less experienced developers?

It’s at this point that a wise company will be using Meisterplan. We know that project teams, sponsors, champions, customers want their work included in the portfolio and will do their best to get it in. So let them.

You will, of course, have an agreed set of measures against which you’ve done your initial prioritisation… You don’t…?*

Now, get each team to produce an optimistic plan:

Then a pessimistic plan:

And, finally, the middle ground:

Capture these plans within a set of ‘what-if’ scenarios, then compare, mix-and-match, include some worst case (as you know, this PM is an optimist) with some best case (as you know, that PM is a pessimist!). Work collaboratively, live, online, with the PMs, modelling these portfolios and scenarios of work. See the effect of changes, instantly, there and then. See how the scenarios stack up against the criteria that you’ve agreed. You’ll argue, people will fight their corner, concede where necessary and finally, you will have a set of options to present.

With spreadsheets, reviews, manual calculations, pivot tables etc. this will take days. With most PPM tools, this will take forever, as they’re simply not equipped to do it. With Meisterplan, it’s an afternoon’s work.

Would you like to see how it’s done? Then please contact us, now, before the next round of budgeting is on us.

Agree? Disagree? Think I’m talking drivel or that I should be emperor? Then let me know, otherwise I’m shouting in the thunderstorm – [email protected]

Meisterplan is a browser-based project portfolio and resource management tool. With a simple, clear interface, users can view, manage and model work demand against resource capacity. 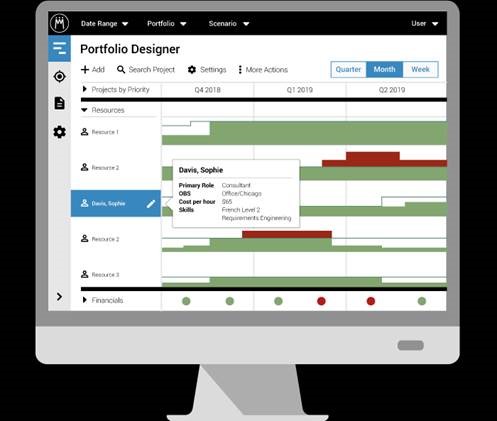